Last Friday, the Internet received an ultimate dose of cuteness when the video of a baby polar bear sleeping with her stuffed Moose was posted online by the Columbus Zoo and Aquarium in Powell, Ohio. Sadly, the cub was abandoned by her mother, so the zoo’s staff is now taking care of her.

The zoo’s press release stated that the mother was too depressed to take care of her baby after the death of her other cub. Nevertheless, the zoo’s staff is doing their best to take care of her 24/7. The cutie pie is 5 weeks old and doing very well.

“The care staff says the sound that she makes in the video is of contentment. Her motor skills are improving each day and she has started trying to stand up on all fours, especially when she’s ready for her next meal!” says the post on the zoo’s Facebook page.

This poor baby polar bear was abandoned by her mother 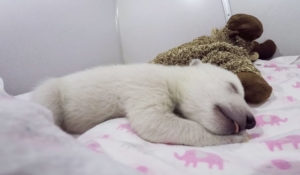 “The sound that she makes in the video is of contentment,” says the care staff

Listen to the video below:

This website uses cookies to improve your experience while you navigate through the website. Out of these, the cookies that are categorized as necessary are stored on your browser as they are essential for the working of basic functionalities of the website. We also use third-party cookies that help us analyze and understand how you use this website. These cookies will be stored in your browser only with your consent. You also have the option to opt-out of these cookies. But opting out of some of these cookies may affect your browsing experience.
Necessary Always Enabled
Necessary cookies are absolutely essential for the website to function properly. These cookies ensure basic functionalities and security features of the website, anonymously.
Functional
Functional cookies help to perform certain functionalities like sharing the content of the website on social media platforms, collect feedbacks, and other third-party features.
Performance
Performance cookies are used to understand and analyze the key performance indexes of the website which helps in delivering a better user experience for the visitors.
Analytics
Analytical cookies are used to understand how visitors interact with the website. These cookies help provide information on metrics the number of visitors, bounce rate, traffic source, etc.
Advertisement
Advertisement cookies are used to provide visitors with relevant ads and marketing campaigns. These cookies track visitors across websites and collect information to provide customized ads.
Others
Other uncategorized cookies are those that are being analyzed and have not been classified into a category as yet.
SAVE & ACCEPT
Choose A Format
Personality quiz
Series of questions that intends to reveal something about the personality
Trivia quiz
Series of questions with right and wrong answers that intends to check knowledge
Poll
Voting to make decisions or determine opinions
Story
Formatted Text with Embeds and Visuals
List
The Classic Internet Listicles
Countdown
The Classic Internet Countdowns
Open List
Submit your own item and vote up for the best submission
Ranked List
Upvote or downvote to decide the best list item
Meme
Upload your own images to make custom memes
Video
Youtube and Vimeo Embeds
Audio
Soundcloud or Mixcloud Embeds
Image
Photo or GIF
Gif
GIF format